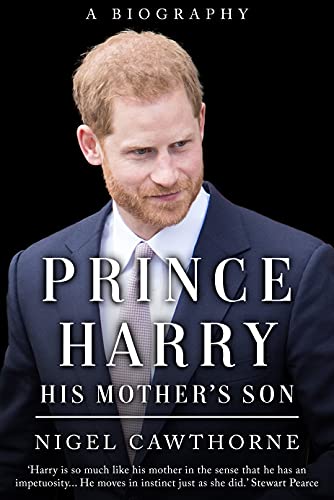 ‘Harry comes across as humane, humorous and sometimes vulnerable in this lively, insightful biography.’ Holly Kinsella, author of Just The Way You Are

Prince Harry remains a controversial figure, frequently making the headlines for both good and bad reasons.

The second son of the heir to the throne has always enjoyed a privileged position.

While the elder son is burdened from birth with the prospect of the succession, his younger brother enjoys all the trappings of royalty without any of the responsibilities.

Prince Harry has often taken full advantage of this and the tabloids have dubbed him the “party prince”.

But, after losing his beloved mother, Princess Diana, at a young age, and being plagued by tabloids throughout his life, it is not surprising.

His turning point came when he proved himself on the front line in Afghanistan.

He has worked hard to become an effective charity fundraiser, both for children and AIDS victims in Africa, and for his injured comrades in arms.

And because of that he has turned his public image around to become the ‘people’s prince’.

Harry: His Mother’s Son tells the story of Harry’s progress, from his wild younger days to his heroic feats in recent years as well as his celebrity marriage and his controversial split with the royal family.