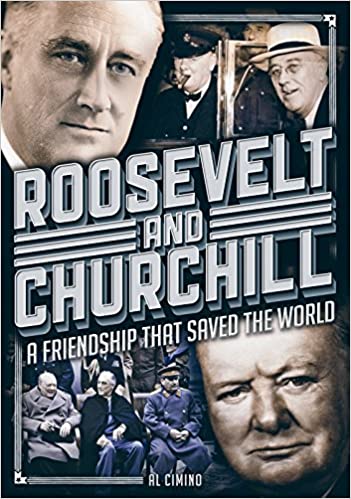 “Being with them was like sitting between two lions roaring at the same time.” —[Churchill’s daughter] Mary Soames

As the world faced the deadliest conflict in human history, Franklin Delano Roosevelt, thirty-second president of the United States, and Winston Churchill, wartime prime minister of the United Kingdom, recognized each other as vital allies. Under the menacing threat of world domination by Adolf Hitler and Nazi Germany in Europe and the military power of Japan in Asia, Roosevelt and Churchill’s urgent need for each other’s support soon turned into a firm friendship.

Thrown together during World War II, their relationship was rarely straightforward. They disagreed politically, but maintained the greatest affection and respect for each other. They would often sit up late into the night drinking and smoking together. Their correspondence comprised nearly two thousand letters and cables.

Together they steered the world through the dark days between 1939 and 1945 and emerged victorious. Both men were fallible, both making political and strategic mistakes—sometimes at the cost of thousands of lives. However, without the bond between them, the war against Nazism, Fascism, and Japan’s imperial ambitions would have been lost.

Roosevelt and Churchill tells the tale of a friendship with consequences like no other, that helped create world peace.